The Acting Ombudsman of the Republic of Vanuatu led a small delegation of 3 people to attend the 30th Australasian Pacific Ombudsman Region Conference in Auckland New Zealand from the 28th of November 2018 to the 29th of November 2019. 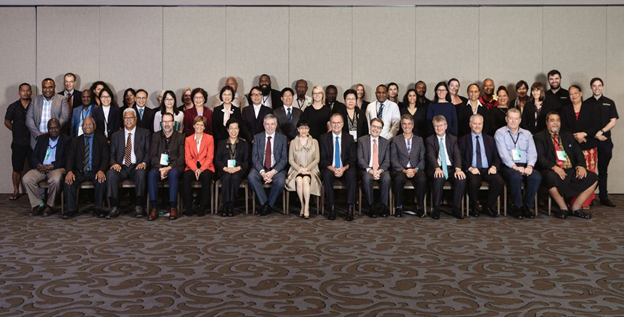 Above is the group photo of the delegates attending the Australasian and Pacific Region Conference.

During this event Ombudsman from the Australasian and Pacific Region came together to discuss different topics such as special challenges in the Asian and Pacific region, how Ombudsman and integrity institutions can address disadvantages still faced by women and about the Ombudsman’s role in facing environmental challenges.

Conference host Peter Boshier (New Zealand Chief Ombudsman) expressed his appreciation for the active participation and the strong presence of the members of the IOI Executive Committee, which he considered an important signal to colleagues in the region. Day two of the conference was dedicated to training regarding the Optional Protocol to the Convention against Torture and Other Cruel, Inhuman or Degrading Treatment or Punishment (OPCAT) and the setting up of National Preventive Mechanisms (NPM) to monitor places of detention and deprivation of liberty.

Over the past four years, the IOI (International Ombudsman Institute) has developed an NPM workshop series to help foster the exchange between Ombudsman offices which hold an NPM mandate. IOI President Tyndall and IOI Secretary General Kräuter therefore gladly contributed to this training part of the conference and presented the IOI Best Practice Paper on how to lead effective change and reported about the most recent NPM workshop, which also dealt with the issue of NPM recommendations and how to follow-up and track their implementation to ensure maximum impact and effective change.

On 29 November 2018 the Ombudsman of the Hong Kong Special Administrative Region (HKSAR) and Regional President of APOR Ms Connie Lau Yin Hing, JP, chaired her last APOR meeting as her official tenure was about to come to an end. As such, the Chief Ombudsman Peter Boshier was elected as her designated successor. Mr Boshier will take on his role as Regional President of APOR once Ms Lau’s term as Hong Kong Ombudsman has ended.